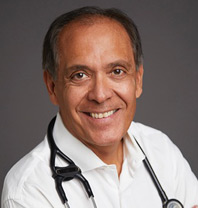 His passion for pets and veterinary medicine was transmitted to him by his grandfather, himself a veterinarian and pioneer of the profession in Canada.

Dr. Gauvin has 40 years of experience in veterinary medicine. He is the Chairman of the Canadian Veterinary Medical Association’s (CVMA) communications advisory group; immediate past President of the Association des Médecins Vétérinaire du Québec en pratique des petits animaux (AMVQ) and past Chairman and member of the AMVQ’s governance committee.

Dr. Gauvin has been involved in veterinary associations, nationally and provincially, since 1984. In 2009, he became the Quebec representative on the CVMA Council, and became a member of the CVMA’s National and International Issues Committee the following year. After being elected as an executive member, he became President of the CVMA and chaired the CVMA Summit on Antimicrobial Stewardship in 2014.

He sat on the board of the Ordre des médecins vétérinaires du Québec (OMVQ, licensing body) from 2016 to 2018.

Dr. Gauvin also has more than 30 years of experience in the field of broadcast (radio, television) and social media. He wrote a reptile practical guide. He co-wrote and realized four videos on the normal and abnormal behaviour of cats and dogs. He taught in two universities and colleges for several years (1985–1996). For five years he co-hosted the popular TV show “Pas Si Bête Que Ça !” on the TQS network. From 2013 to 2016, he joined the team of the TV Show “Libre Service” aired on MAtv. He is currently a veterinary columnist for the Moteur de recherche (Search Engine) radio show that airs on Ici Radio-Canada Première. His blog is titled «The blog of a small animal veterinarian».

In 1995, the AMVQ gave him the “Damasse Généreux” award. This distinction recognizes the importance of a veterinarian in the development of companion animal veterinary medicine in Quebec. In 2000, he was the recipient of the Small Animal Practitioner of the Year, awarded by the Canadian Veterinary Medical Association.

Dr. Gauvin is married to Lyne, has two sons Charles and Alexandre, a wire-haired teckel named Maya, Gaston an orange tabby cat and Caroline the turtle.